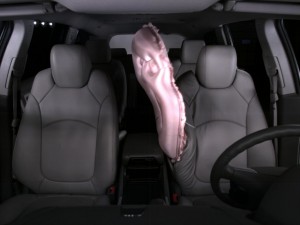 Jim Hudson GMC, South Carolina’s #1 GMC dealership, is proud to announce that GMC will introduce on the GMC Acadia the industry’s first front center air bag, an inflatable restraint designed to help protect drivers and front passengers in far-side impact crashes where the affected occupant is on the opposite, non-struck side of the vehicle.  This new front center air bag will be introduced on the GMC Acadia midsize crossover in the 2013 model year, and will be standard equipment on all Acadia models with power seats.

The front center air bag deploys from the right side of the driver’s seat and positions itself between the front row seats near the center of the vehicle. This tethered, tubular air bag is designed to restrain the driver during crashes on the passenger side when the driver is the only front occupant, and also acts as an energy absorbing cushion between driver and front passenger in both driver- and passenger-side crashes to keep both passengers from colliding into each other. The air bag also is expected to provide benefit in rollovers.

GM analysis of federal highway fatality data found that far-side impact crashes, which the front center airbag primarily addresses, accounted for 11 percent of the belted front occupant fatalities in non-rollover impacts between 2004 and 2009 involving 1999 model year or newer vehicles. These far-side fatalities, where the occupant is on the non-struck side of the vehicle, also represent 29 percent of all the belted front occupant fatalities in side impacts.

“The front center air bag is not required by federal regulation, and no other air bag in passenger vehicles today offers the type of restraint and cushioning this air bag is designed to provide for front occupants,” said Scott Thomas, senior staff engineer in GM’s advanced restraint systems.

This new front-center airbag builds on the GMC Acadia’s incredibly stellar track record in crash testing by both the federal government and by third parties. The 2012 GMC Acadia for sale in Columbia SC has received five-star Overall and Side Crash safety ratings from NHTSA’s New Car Assessment Program, and 2011 Top Safety Picks from the Insurance Institute for Highway Safety.

“The front center airbag has real potential to save lives in side crashes,” said Adrian Lund, president of the insurance Institute for Highway Safety. “GM and Takata are to be commended for taking the lead in this important area.”

GMC and technology supplier Takata developed the front center air bag over the course of three years, working through many design iterations to achieve the proper balance packaging, cushioning, and restraint for a variety of crashes and occupant positions. Numerous elements of the air bag’s jointly patented cushion design address the restraint’s unique performance characteristics while considering a large range of potential driver sizes.

“While no restraint technology can address all body regions or all potential injuries, the front center air bag is designed to work with the other air bags and safety belts in the vehicles to collectively deliver an even more comprehensive occupant restraint system,” said Gay Kent, GM executive director of Vehicle Safety and Crashworthiness. “This technology is a further demonstration of GM’s above-and-beyond commitment to provide continuous occupant protection before, during and after a crash.”

2012 GMC Acadia crossover SUVs are available now at Jim Hudson GMC in Columbia SC.  Jim Hudson has served Columbia drivers for over 30 years with a focus on complete customer satisfaction, and is the #1 GMC dealership in the entire state of South Carolina.  Jim Hudson has been awarded The State’s Reader’s Choice award for Best New Car Dealership eleven years in a row and counting, and carries a full range of new and used GMC Acadia models including the 2012 GMC Acadia Denali.  Jim Hudson GMC is located at 7201 Garners Ferry Road in Columbia, and can be reached by phone at (888) 377-4971 or at their Columbia SC GMC website.

Other used GMC trucks and SUVs for sale in Columbia SC

Acadia features a steel safety cage and six airbags along with a host of other safety systems.

Acadia was among the first vehicles tested under NHTSA’s new rating system, which was implemented for the 2011 model year. The new rating system is based on tougher frontal and side crash tests on top of rollover resistance testing. These three test conditions are combined mathematically to form an  “Overall Vehicle Score.” Acadia achieved an overall vehicle score of five stars under this testing regimen – the highest rating possible – even though several individual tests resulted in four-star ratings.

Acadia contains multiple safety systems designed to help protect passengers before, during and after a crash. Standard safety-enhancing features include StabiliTrak electronic stability control system with rollover mitigation technology, six air bags and OnStar’s Automatic Crash Response system that can help get emergency responders to a crash scene quickly even if the driver is incapacitated.

A strong and well-designed vehicle structure is foundational for crashworthiness, while a wide stance and low center of gravity helps reduce the likelihood of a rollover. Acadia’s vehicle structure features several areas reinforced with high-strength steel. Six air bags inside Acadia include dual-stage front air bags for the driver and front passenger; two seat-mounted side-impact air bags in the front row; and two head curtain side-impact air bags that cover all three seating rows. The head curtain side air bags are among the longest air bags in any production vehicle.

Complementing the air bags is GM’s rollover sensing system, which can activate the side-impact air bags if sensors determine an imminent rollover. In a rollover, the air bags stay inflated longer to provide increased occupant protection.